The Stories That Were Never Told

I offer this post as my Memorial Day tribute. There will not be a post on Memorial Day, because my attention will be on those who gave their lives in service to this country and never got the chance to tell the story. 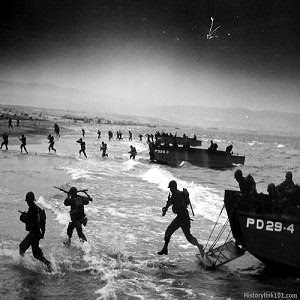 War stories are a fascinating genre in literature, particularly because they are from the survivor's perspective. Like any honest recollection of history, the story comes from those who lived through the horrors and came home. They can talk about those who didn't make it home, but in the end it is a survivor telling their story, and offering their perspective on those who were killed.

In Saving Private Ryan, (spoiler alert) we see the D-Day invasion in harrowing detail from the perspective of Tom Hanks' character. His landing craft takes heavy fire the moment the door opens, and he has to bail out over the side. He swims to shore, fights his way through the hell that was the beach, and makes it through the day. Everyone talks about that scene - it is truly the stuff of great stories.

Now let's go back to the landing craft. As the gunfire hits it, plenty of soldiers are killed instantly. Some go over the side only to be killed by enemy fire in the water, others drown, and some reach the beach only to die from a variety of other nightmarish fates. How often do we think about their stories? They had full and complete lives until that final moment, but do we look at everything that led them to that final moment? Perhaps that's what makes the movie so compelling - we see some of those lives in full, even though they end in the tragedy that is war.

As writers, we need to acknowledge that every person has a story. Some receive more focus, such as Tom Hanks' character, but every character in that movie had a story of value. In some ways, the story of the man who died in the landing craft is especially valuable, because his heroism ended a few minutes into the movie. It's easy to write them off as side characters, but each one of those men had live and experiences that were unique and irreplaceable. They all had family and friends, they all went through boot camp, they experienced things we will never know because before they could tell that story, they died on the beaches of Normandy.

It is a genuine art to examine a life for its story when the obvious part isn't apparent. When we write, we need to look for the hero in the man who died on the landing craft. His death is just as tragic as any other, his heroism just as much as anyone who rushed that beach, but his humanity is what makes the story come alive again.

And on that note, our final responsibility as writers telling about other people is to bring them to life one more time, telling their story and breathing some air back into the world that ended so tragically. That is a heavy responsibility for a writer to bear, but nothing compared to what those men endured and ultimately died for. As writers, we owe them that much.
Posted by James Pressler at 10:55 AM