Earlier, I talked about some of the points about developing characters and the many details that make them feel real. From family life to musical stylings to weird little idiosyncrasies such as a fear of sock puppets, a character is constructed with these touches as his framework. Today's post is going to guide us toward what choices can really deliver some effect, and how we get to this through setting and conflict. 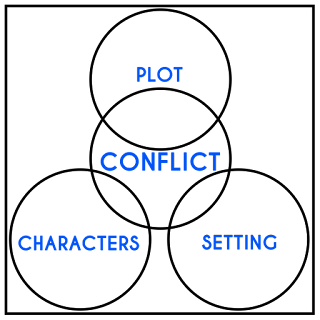 First and foremost, let's look at setting. This is the environment where the story is going to happen, and when we start writing, we should have a pretty narrow, concise view of where it is. Saying, "Oh, this happens in present-day USA" is not very helpful other than offering a timeframe. Urban, suburban, or rural? Northern or southern? East coast, west coast, or in between? We need to find an ideological spot, if not a real spot - I can say it happens in the inner city and not pinpoint it to the Back of the Yards area of Chicago, or the the little fictional town of Billington in the American Heartland will do without reference to a specific state. The setting centers the reader, which is the important part for them. For the writer, it should be a secret way of helping establish the character.

In my upcoming book, Small-Town Monster, the setting is in fact, the small town of Billington. Why? Well, as the title suggests, it has to be in a small town. However, this setting works well for a character who is resistant to change, has a life centered around his family and the same people for decades, and lives by established patterns from a well-defined history in one never-changing place. These character traits would be more difficult to fit in a fast-paced urban setting (though the challenge of that character in a changing environment would make for some interesting drama), so I found an environment where the character could thrive.

Now that we've established setting, let's move to conflict and ask ourselves what kind of conflict would give this character the biggest headache. The immediate thought is change. Someone who is resistant to change and lives a very regulated live would be impacted the most by change, so we make change a part of the conflict.

However, is change narrow enough? Kind of a broad brush to paint with - more like a big roller - so let's narrow it down and spread it around. First, there's a specific change in life. The main character loses his father. That change can work on several levels. A person loses their father, things start changing all around. Also, we add that this impacts his family-centered nature, so more of his life is uprooted. Now there's tension. Our poor character really has a problem.

Is this enough to be an entire book? Well, we need the plot hook, and it needs to incorporate the setting - the little town of Billington - and we need the character conflict, which is the loss of a parent. The only thing left to add is the call to adventure that moves our hero along. When our hero finds out his father kept a secret hidden for decades that could change what people thought about him and the entire town, now the story takes off. The reader wants to know more about the secret, the character has to put together his new life, and events start piling up, each one raising the stakes in this little town.

That's why setting and and conflict are so important.