When I was 27, I quietly prepared for a big milestone in my life. It was something that everyone my age would experience, but as far as I know, nobody celebrated or even recognized. I started putting the festivities into gear by acknowledging this moment to my friends who were slightly older, then warned younger friends that their big day was coming as well. I drummed up a fair amount of excitement about this - in a time when social media was nonexistent - and had a lot of fun when my big day finally arrived. What was the occasion? 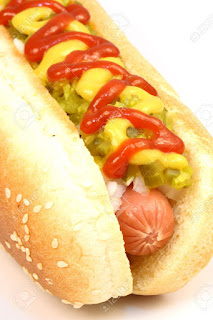 Now, I would wager that most readers never made a fuss about such a day or even realized it happened. Most everyone who I talked to at the time had absolutely no idea that day had arrived. However, once they realized it, well, the moment changed them and they embraced it like a 50th birthday or some other great landmark in the otherwise boring stretch of life known as the late 20s. It was new, novel, interesting, and even though it had always been there, the revelation of such a fact opened their eyes to a new way of seeing the world. And they definitely knew a lot more about me once I brought this to their attention.

A writer can get a lot of mileage simply showing a character's interests through a series of actions. If the hero does not like ketchup on his hot dog (and what true American does?), the writer can insert scenes where the hero avoids the ketchup bottle at the hot dog stand, or scowls at someone who slathers their dog in the stuff. That definitely shows a point of view and defines one of our hero's traits. However, does it go deep into the psyche and expose what motivates such behavior? All it tells us is that this person is against ketchup. We can do more.

The writer obviously knows that the hero does not like ketchup on a dog, but the reader latches on when they find out why the hero is so anti-ketchup. Maybe he offers a quick statement about how he is a Chicago traditionalist who learned from a young age to never use ketchup. Perhaps he has a refined palate and prefers the blended taste of celery salt, mustard, relish and peppers without it all getting washed over with tomato paste and sugar. Better yet - maybe he never really questioned why, but simply followed the herd. This could actually open the door for character growth, which attracts the reader's interest as well.

We could offer a bunch of reasons for our character's choices, but the importance is finding a way to include those details in the greater narrative. Once the reader understands why our characters do what they do, they engage with them on a new level and follow them more closely. And for those of you who are regular readers, the best thing an author can do is engage their reader. Offering insights into the character's motives is a top-notch way to do this.

And incidentally, in two years I turn 20,000 days old - in case you want to start the celebrating early...