The Rules of Creativity (Trust Me)

Please don't all jump on me at once. I made a few posts about creativity and rules a few weeks ago, and it seems that everyone thinks there shouldn't be creative rules. Of course I see their point, but the subject is not so easy. And yes, I understand that people might think that because many of my posts are about the rules and regulations of writing, that I am some rules monster who insists everything follow a fixed pattern. Give me a few paragraphs, and I can convince you that even the most creative writers held to rules. 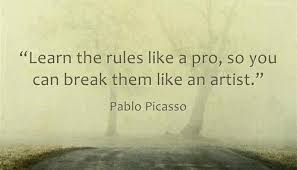 Once upon a time, painting was all about representation of the world around us. Artistic expression had distinct boundaries, namely the real world, and that going outside those limits was either the sign of flawed skills or an attempt to insult someone by altering their perceived image. Slowly, however, reality gave way to different schools of creative expression, and before you know it we had Romanticism, Expressionism, Cubism, Neo-Realism, and countless other schools of art. This may seem like a wild array of creativity, and it was, but they were still guided by a set of rules. The rules, however, were more conceptual. Picasso's many works may look entirely bizarre when compared to the real world, but they fit beautifully into the school of Cubism, and so forth.

Now how does this appeal to writing? Well, let's look at points of view first. We can narrate a story from first-person, third-person, third-person omnipotent, fly-on-the-wall, and so on, and each comes with its strengths and weaknesses. Now, some people have approached me (when I had my editor cap on) and asked, "Well, what if I use a variety of those methods in my story, depending on what I want that part to say?" Interesting choice - and creative at that. But let's look at the rules.

Each point of view is used to give us a particular feel at the expense of something else. First-person puts us in someone's head but their narration excludes other perspectives so we have to trust our narrator's perception. Third-person is the same but we are a witness to a story rather than fully engaged. Omnipotent means we have a complete set of information at the expense of tension. If we bounce between these, we gain a lot but we lose a lot as well. So the creative writer will think about when they can use each to their advantage.

Referring back to Picasso, his Blue Period was not inspired by an abundance of blue paint, but rather a somber expression of depression and loss. Most of the people he painting were, in reality, flesh-colored people, but he used a blue palette to draw out the moodiness of his subjects. The expense was that the people could not be identified in real life, but that was okay - the paintings were about a feeling, not a person. In that regard, he followed the rules of creativity - breaking one rule to emphasize the point made by another rule.

Plenty of novels shift perspectives and go between different characters - it's expected practice in broader epics these days. However, this is done in order to bring out some particular point or concept, and it is used very carefully so that what is lost be the shift does not detract from the storytelling. This creative rule structure, when done with an exacting purpose and meaning, provides for some fascinating results.