In every neighborhood there's at least one of these houses - often more. You know the house I'm talking about. Among rows and rows of nice homes, there's that one residence that's seen some real hard times. It always stands out, and not in a good way. Worst case scenario, it has a front door sealed and bolted with a double-padlock, boarded-up windows already vandalized, broken eaves, fallen gutters, a host of overgrowth terrorizing a neglected lawn, and every other sign of neglect available. You know that house? So do I. And as I passed it today on one of my walks, boy was I surprised. 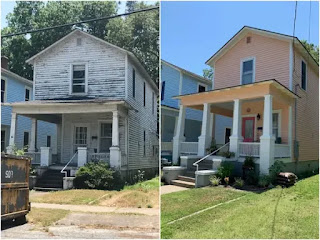 The massive dumpster outside had been there for a few weeks and brimmed with every piece of wreckage imaginable. From scrapped drywall to discarded carpet, everything once inside the house was now inside the dumpster, and a work crew now diligently worked on the last of the house's facing, interior paint, roofing and siding. I am not sure how much of the original house was left, but this shattered piece of real estate that ghosts would be reluctant to haunt was now on the verge of being a cute little starter home. I stopped to talk to the crew and they let me see the interior, which was redone in every possible way. I was amazed, though I recognized the floor plan itself was still very much the same, save for a sunroom added in the the back. I left feeling better for the house, the street, and property values in general.

Now, this got me thinking about writing, as most things do, and about what it would take to rehab one of my older stories. After I went home, I looked through my "stories" folder on my PC, sorted the files by the date they had last been saved, and opened up the oldest story available. After a minute of reading, I realized this was the run-down house of the neighborhood of my writing career. Before I decided to revise it, I tempted fate and opened up another story. An absolute wreck - worthy of being condemned. With a little trepidation, I opened up a few more files, hoping against hope for something impressive. Instead, I realized I was the slum lord of bad stories. They were everywhere I looked.

However, this is where the walk through the rehabbed house gave me hope. From my days restoring apartment buildings back in the 1990s, I could see what had been done to this house - what had been replaced, what had been restored, and why each choice was made. And after decades of writing, I could look at a disaster of a piece and think, "I can see where the passive voice is weighing down the narrative. This is where the author is telling, not showing. These point-of-view shifts are taking away from the reader's perspective." After that, it's just a matter of putting in the work to take a real crappy story, apply the tools we've developed, and make it into something worth being proud of.

Sometimes, revising a real old story can be an excellent exercise in that we get to actively go through our story-creating tools and apply them one-by-one, making a bad thing better. Probably the most difficult part of this task is realizing that at one point we originally wrote that first draft and thought, "Damn, this is pretty good!"

They can always get better.

Posted by James Pressler at 5:02 PM