When Raiders of the Lost Ark came out (spoilers ahead), I made a special point to see it on the big screen. I had heard all about this high-adventure spectacle with its immersive action. And, of course, people said it was a great movie that moved at a rollicking pace but still managed to tell a great story. So there I was, in the privacy of a crowded movie theater, soaking in this grand story of the race to find the Ark of the Covenant. And yes, there was humor, action, betrayal, romance, and a worldwide adventure. The movie fan in me thought it was great. The story fan in me was kind of let down. 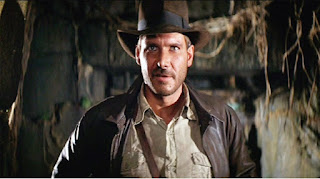 Now, there is a very distinct gap between a movie fan and a story fan. A movie fan has an appreciation for how a story is told through sight and sound along with all of the techniques used to spin a yarn about an archaeologist on an epic quest. A story fan, however, cannot be swept away by the scenery, John Williams' music, or the mostly impressive special effects. Rather, sometimes those things get in the way, or are used to make up for a story that can be weak, thinly motivated, or ultimately unsatisfying.

Here's a little test for any adventure story: Ask yourself, "What happens if the hero never gets involved?" In an epic adventure, the results should be quite dire. In Lord of the Rings, evil would've overtaken Middle-Earth - which is bad. The Prydain Chronicles - same thing, evil would win if our hero never answered the call to adventure. This seems very important to any thrilling tale, because so much is at stake. Our hero is motivated because the fate of the world is in their hands. So, when they finally do succeed, the reader shares in the success of a mission accomplished.

Raiders of the Lost Ark failed this test, and that's where I, as a storyteller, was let down.

If Indiana Jones had stayed at his university and never went to see Marion and set out on this adventure, what would've happened? The Nazis would've retrieved the relic required to find the Ark, dug it out taken it somewhere, and the apparitions would've poured out and wiped out all the bad people around it because - big surprise - holy spirits hate Nazis. Jones was incidental at best. The actual role Jones took was one of risking others. He brought the one necessary relic to the one place it was needed, thus helping the Nazis find the Ark in the first place. Think about that - is this really a wise move? Furthermore, is the ending really a satisfying one if you exclude the famous visuals of all the bad guys melting or blowing up? As a story, it's kind of weak.

I bring this up to offer a simple challenge to any adventure story. At the end of the tale, ask yourself how the world was changed by your character's involvement. Were innocent people spared? Was disaster averted? Did the journey have a satisfying payoff that otherwise wasn't possible? Even if the sole difference is that the hero realizes something about themselves, this can be valuable. Just remember that as a writer you need this realization, because your story can't fall back on special effects.