What's In A Word?

The picture with this post is one of my favorites. It's not just the color of the twilight sky, or the beaten-up condition of the sign that gives it sort of a folksy look, but how the actual misspelled word is so formal and proper, as if it belongs there with the errant letter A somehow having a sense of purpose. It reminds me of Stephen King's Pet Sematary, where the spelling error in his novel title is done to create a childish whimsy concealing a dark secret. However, such is not the case with this sign - it's just a screw-up, courtesy of the good people in the Steger Public Works Department or whoever manages the road signs in that town. 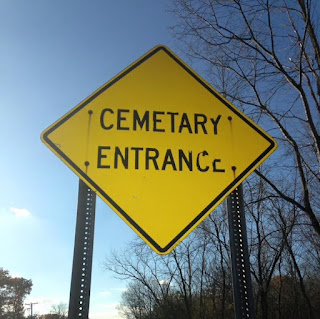 The other reason I like that picture is because it reminds me of how a specific word can create an entire mood or feeling that we don't quite understand until the word is changed. We have all seen an abundance of cemetery entrance signs in our lives. What if the sign said, "Graveyard Entrance"? A cemetery and a graveyard are basically the same thing, but they definitely evoke different feelings. For me, a cemetery is a reference to a place of headstones, mausoleums, and dedications to those now gone - it's all about what is above the grass. A graveyard, however, reminds me about what's below the grass. It has a natural chill to it, a feeling of damp soil and misty fields of grass being interrupted by holes violating the calm. They are the same thing, but they evoke different feelings.

How about the word, "slaughterhouse"? Just hearing that word evokes images of blood. Say what you will about slaughterhouses, but the word really paints its own picture regardless of context. However, a common synonym for that word is "abattoir." Some of you may have never heard of this word - I had to look it up when I first came across it - but it is a synonym often used that totally washes away the stigma that comes with "slaughterhouse." Usually, abattoir is used to refer to the broad operation or industry of animal processing, while a slaughterhouse is much more specific. However, each one has a purpose. Would Kurt Vonnegut's most famous novel be as popular if it was called Abattoir Five? I kind of doubt it.

The whole point of this is that one can, and should, fuss over words like this. Not only is it good to have a pocket full of synonyms to avoid repeating the same word five times in a paragraph, but it is another tool in sculpting a mood. A walk through a cemetery isn't as scary as a walk through a graveyard. Ghosts haunting a house are not as fearsome as poltergeists, and definitely not as classy as specters, though they're basically interchangeable (with a certain degree of latitude).

I always approach word choice as a second-draft operation. In the first draft, I get the ideas down and get to know what kind of mood I want to create for a certain story. Once I know the mood for a specific scene, then I start toying with word use, and ramping up the richness of the scene. Word play is a great way to do this. Just make sure you spell them correctly.