I guess I should've seen this coming. My last post involving writing exercises involved using the following prompt: "She decides to use dynamic programming..." That actually prompted a few people to write some special things - in particular, IMs to me asking how on Earth they could possibly write about something that involved "dynamic programming." Well, that's a fair question, but the answer is all about context, not the intricacies of dynamic programming. 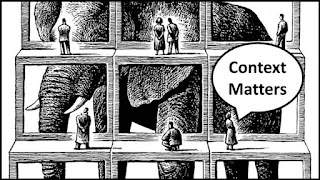 Let me offer you a little piece of writing about an event in my life to emphasize context:

"I curled up on the couch with my laptop and too much coffee, ready for the monstrous task of creating a spreadsheet to manufacture a brute force proof of Benford's Law. Half an hour into my project, I was happily typing away, all the columns established and all the formulas in place, when a prompt appeared asking about installing the latest Windows updates. Because I was caught up in the flow of my work, I wasn't exactly paying attention to random prompts, and I clicked for it to update. Only after that fateful click did I realize that I hadn't saved my work, the formulas weren't checked, and Windows was now hijacking my laptop, effectively settling in on my couch to do updates until my coffee got cold. I am sure the neighbors heard my frustrated scream."

Now, what exactly is Benford's Law? The answer in this situation is, "Who cares?" (It is actually interesting. Check here if you are curious.) The important part is extracting evidence from the context to set the stage for the writing piece. From the writing excerpt, we understand that proving it is a monstrous task, the proof requires a sizeable spreadsheet, and the task is labor-intensive. Just like the "dynamic programming" reference in the prompt (This is dynamic programming), the only thing we need to know is that the woman in the prompt chooses this particular tool for whatever reason. Maybe she is better at it than the rest of the people she works with. Maybe she firmly believes it's the right way to go. Maybe the whole gist of the story is that it was the wrong way to go but she refuses to acknowledge it. We don't need to know what it is, we just need to know how it affects the main character.

Here's a simple sentence: "Marby plimped Durnby's frissure." Does this make sense to you? My spell-checker says it shouldn't, and it's right. These aren't actual English words, but we can pick up things from how they are used. I don't know what a Marby is, but the next word is written like a past-tense verb ending in -ed, so Marby is likely a noun, and a noun that committed an action - the verb "plimp." Now, what was plimped? Was it Durnby? Well Durnby is capitalized, so it's likely a proper noun, but the apostrophe suggests Durnby wasn't plimped, but rather something possessed by Durnby. You guessed it - the frissure! Now, we still don't know the exact actions that occurred, but we know that Durnby possessed a frissure, and Marby plimped it. With one nonsensical sentence, we can still extract some context. (A tip of the cap to the movie, "One Eight Seven.")

Now let's get back to some writing prompts. Here's a great one: "Marby plimped Durnby's frissure."