Yes, there's an Olympics theme to this post to commemorate the start of the Winter Olympics. Don't worry, I won't get into the details of proper bobsled technique or the finesse required to perform a triple Lutz. No, this is about our pursuit of being the best writer around, and just what it takes to win it all. 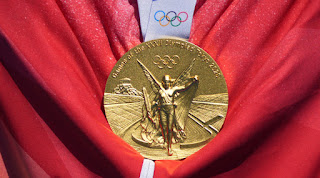 Everyone who pursues writing beyond that of just a hobby wants to be the best. They don't just want to write a poem, they want to compose lines of such elegance that complete strangers are moved to tears by its depth and beauty. It's not about writing a novel, it's about writing the Great American Novel that future college courses will study, parsing through every line and drawing out the intricate nuances woven into every phrase. Nobody who does well sets out to write crap. They will write a lot of crap at first, but it gets better as they perform that alchemy that turns bad writing into gold.

And that's the important part here - the pursuit of being a better writer. Our Olympic athletes started at a very young age and rigorously trained for most of their lives to compete in the Olympics. Even as they won gold medal after gold medal, they still trained to be just a little bit better. They go through the constant process of conditioning themselves in every way to physically transform themselves into what they ultimately want to be - the best.

Now, as writers, we are fortunate. We don't have to start off at six years old swimming lap after lap at five in the morning in order to be good. We don't constantly risk our bodies to step it up one more notch (if your body is at risk from writing, you're doing it wrong). However, a good writer has something in common with these athletes other than continually trying to improve. They incorporate what they want to achieve into their everyday lives.

Most top-notch athletes have a few things in common other than a lot of practice. They watch their diets. They exercise even in the off-season. They get enough sleep, they limit their vices (though this is a gray area with some athletes), and they incorporate a lot of good habits into their lifestyles (again, sometimes a gray area). This is something we can do as writers that will feed back into the way we approach our work.

The best way I know to train my writer's brain is to people-watch. When I have idle time, I pick a random person and think about how I would describe them in narrative. What trait would I showcase to the reader? How would I spell out that person's mood, their presence, how that person made me feel when they spoke? When I am eating dinner, how would I describe my pizza without using taste? What sounds make good descriptors for food? I can do a lot of writing exercises without even writing. It may sound odd, but incorporating these little things into my lifestyle quietly conditions my writing muscles, and once I start working on a piece, I do so with that much more skill.

If we set out to live the writing life, and do things that help our creative minds flourish, invariably our writing will improve. Will we become Olympic-class writers? Who is to say? Just as long as we keep on improving our craft, we have a shot at the gold. (and a Pulitzer Prize in fiction kind of looks like a tarnished gold medal, so there's that.)

Posted by James Pressler at 1:45 PM