More About Writing and the Super Bowl

Despite this being February 14th, this is not a post about Valentine's Day. Over the past couple of years I have posted something connecting the previous Super Bowl to being a better writer, and I fully intend to maintain that streak. It is just an unfortunate coincidence that my post-Super Bowl entry just happens to coincide with the holiday. I promise I will make it up to you. But for now - let's see what we can learn as writers thanks to the Super Bowl. 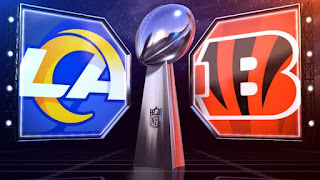 This lesson doesn't require any knowledge of football, so everyone can enjoy it. While I will be taking advantage of having watched every Super Bowl since the mid-1990s, the actual football part does not matter. The important takeaway here is originality, or the lack thereof, and how it can really take the air out of a story.

This year's Super Bowl was a great game, preceded by several other great games in the previous weekends, and a lot of people were excited to see something new and different for a matchup this year. A lot of the players had never been to the Super Bowl before, the quarterbacks were new to going to the big show - it was all fresh and new. The one thing that wasn't all that fresh and new, and became quite evident as the game went on, was the announcing. It became problematic, and this should be a good reminder for all of up writers.

My friends and I used to put together lists of announcer catch-phrases in sort of a game of cliché bingo, waiting for the announcers to say:

And so on. To the announcers' credit, they are usually good at mixing it up a little, but sometimes they just dive into that old bag of used lines a few too many times, and it takes the excitement out of the game. We don't need to be told, "The atmosphere here is electric!" because we have no reason to presume otherwise. So when we are told this anyway, we lose a little interest in the announcers every time.

As writers, when we put together a 10,000-word story, sometimes it's easy to fall back on some standard phrases for our descriptions. "The howling wind...", "He barked the orders...", "It hit him like a ton of bricks..." Yes, these have a place, but that place should usually be in the trash can. Sure, wind howls, orders are barked, and having a metaphoric ton of bricks fall on someone is pretty strong. As we type this we might not feel how worn-out it sounds, but after a while, the reader feels it, and chances are they get tired of it.

Whenever you feel like just putting in some standard phrase so you can move on, make a little note about it for future editing. Remind yourself that you could probably do better, and come back to it after you complete the first draft. Maybe you will come up with something new, maybe not. However, as you try, your skills become sharper, and you have less of a need to fall back on, "It's win or go home."