Don't Worry About the Opening Sentence

I am in a bit of a writing slump. I am not blocked by any means; I am awash with stories and poems and the like. I have a bunch of writing prompts I am ready to jump on, a few I want to turn into longer pieces, and some ideas that are just floating around my mind like fertile little dandelion seeds drifting in the breeze. No, my problem is one that I periodically have to face down, and to do so, I have to get past the simple task of starting the story. 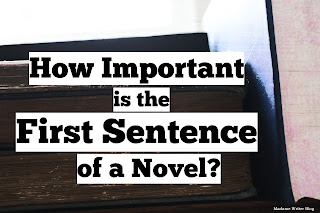 I've mentioned more than a few times that I spent a career in the financial world, and needless to say, that life came with a bundle of stories. After having read a number of authors' works on their experiences with big banks ("Liar's Poker" by Michael Lewis is a must-read), I decided to start writing down my experiences. These stories would hardly be as insightful as those of Mr. Lewis, and the events in my little fiefdom did not have as big an impact on the global financial world as his did, but these stories were worth writing down and preserving for a while. But how?

My hang-up is that damn opening sentence. When I want to write about, say, the approach of the 1997 Asian financial crisis or the inflating and bursting of the NASDAQ market bubble, I know these are big, important stories and deserve big, important opening sentences. Anything that brought recession to a billion people or wiped out trillions of dollars of wealth needs to start off big, right? Right? Who am I to do that?

There should be a twelve-step program for writers that helps them remain grounded and not get consumed by the breadth of the task ahead. And one of those steps, which I have mentioned in previous posts, is to not worry about any one sentence, phrase, or word before you finish the story. This counts for opening sentences as well. There's no sense in letting your creative process get all backed up while you worry about how to start the story. Write the first sentence, let yourself understand that you can change it at any time, breathe, then write the rest of the story. Accept the fact that you won't truly know the opening sentence until you have written the last sentence.

There is a time for fretting over the details, and pondering over just the right words. Former Fed Chairman Alan Greenspan once said that he would sometimes spend twenty minutes pondering over exactly what word to use for a particular sentence. Whether you were a fan of his or not, that is an impressive commitment to detail. Also, I would wager that he had already written his first draft before he dove into the task of creating phrases like "irrational exuberance" (which, supposedly, took him fifteen minutes to decide upon).

So, simply put, I am now writing again after putting in a first sentence that I know will just be a placeholder for something much better, and I will get to it when I get to it. Meanwhile, I have a story to write, and that process of creation is far more exciting than pondering over one little sentence.