How Themes Flesh Out A Character

I love Chicago. Anyone who knows me knows that. I hate the politics, I despise the crime and corruption, but I love the grittiness and texture of its history, its stories, and its urban DNA. Whether it’s from when I first came screaming into this world in what is now the Medical Campus, lived by Rainbow Beach, worked in the Loop or managed an apartment building in Ukrainian Village, it all harmonizes with my life story. Even though I no longer live in the city proper, Chicago is still that friend I can call any time and grab a drink.

So to recap, I love Chicago. 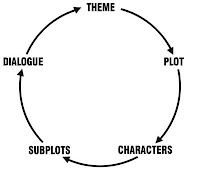 If any of this sounds familiar, I did write an earlier post, Making an Environment Into A Character, where I professed my love for my city. This post will now focus on using some aspect of the environment to give a character structure and definition. If I was portrayed as a character, this whole Chicago thing would need to show up somewhere. But how?

The first step is finding habits or manners that signify this preference. Does the character wear a Cubs or White Sox cap everywhere, and if they do, are they sensitive to comments from someone wearing an opposing cap? Do they know their bus routes like a secret Chicago code? Do they drop terms like “The Lake Effect” or “Tornado Alley”? Do they actively correct a person who tries putting ketchup on their hot dog? These are Chicago things, and as they come into play, they fill in the character.

However, the more nuanced themes are the ones that are relatable to more than just the limited Chicago audience. Incorporating parts of a character’s background into their present-day actions can offer more depth to a character than geography ever could. Most every reader will be able to associate how the past stays with a person in the present, living in their every action, and the writer should take advantage of it.

Here’s a character to consider. Richie owns a bar in the little town of Billington, where he grew up. He’s divorced and has a son who he sees on the weekends. His parents still live in town, his sister is close by, and he had an older brother who died when Richie was in college. He is a character to work with, and can fit into one of any number of stories (He’s already taken – currently in my manuscript, Small-Town Monster, currently competing in the 2018 Illinois Manuscript Contest). But anyway, we know his basics, so how do we give him depth through thematic elements?

Well, let’s look at the details. First, he’s divorced – that’s worth exploring. Even if the subject never comes up in the story, the writer had better know exactly why he got divorced, and even how it sits with him. I’ve never seen a family break up without some scars, and since writing is supposed to be interesting, this should be an important issue. The writer now has the opportunity to turn Richie's relationship issues into an ongoing theme, allowing it to influence his decisions wherever appropriate. Whether it’s a simple thing like a derogatory nickname for his ex or as broad as how the divorce affected all his other relationships, incorporating this into the character’s life gives us a better understanding of the character.

Oh – his brother died. Death shapes everyone’s life, so make sure the reader knows just how Richie was affected. Is he more protective of his son? Did it strengthen Richie’s relationship with his sister? Was the relationship damaged? How did it affect his parents? Do they talk about it or ignore it? Does Richie think about it even at the oddest moments, or does he try to push it out of his mind even at family gatherings? The weight of such a tragedy would surely affect his life, so the writer should take that into consideration and find where it can be used.

One last big reminder about themes – consistency. Themes do not exist in isolation – they spread across everything. Since Richie is divorced, how does he feel about his friends’ marriages? Is he cynical or optimistic? Does he believe in soulmates? Has that changed since the divorce? This continuity is important for two reasons. First, since it deepens the character, it has to constantly go in the same direction, otherwise the reader gets mixed messages and loses their understanding of Richie. Also, an inconsistency can be seen as the character changing his position over time. This is a great way to show character growth, but if the change is incorporated accidentally, the reader gets very confused. Instead of a deep character, you have an aloof character. Not a big market for those.

There’s a very cool technique for working with themes, and well worth explaining. The next post will be about tracking themes and sketching out the narrative to make sure nothing gets lost and your character retains as much depth and beauty as the Chicago Skyline.

Posted by James Pressler at 2:28 PM