Personally, I have several themes running through my life. They are such constants that I rarely even notice them. Occasionally one will rear its head in an obvious way – a good friend’s birthday came up, which reminded me of how tough his death was on me and how my life will forever be painted over by that issue. However, that doesn’t mean that those feelings don’t exist for the other 51 weeks of the year. They are still there, lurking in the shadows, waiting for another anniversary. 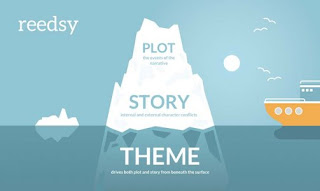 For the characters and the stories we write, those themes should play a role in every section, or at least be noticed. Sometimes a subject won’t be important, other times it will, but some trace of it should always haunt the pages, even if that particular theme is not the dominant part of a particular chapter.

The problem, however, is that just like our real life, it is easy to overlook those elements when we are engrossed in the rest of our lives. When I am writing or reading or cycling, it is easy to let the rest of the world fade away. I no longer think about politics or economics while cycling through the countryside, I just ride with a blissful ignorance to the world around me. In life, that’s fine. In writing, it is an opportunity to show how those two worlds are never truly separate.

In the previous post, I discussed a character, Richie, and how various themes about his life could be expressed. This post will demonstrate how those same elements could be shown during non-related events to emphasize a particular mood.

As mentioned in the previous post, Richie owns a bar in his hometown. He worked there as a teenager, met plenty of friends on both sides of the bar, and eventually bought the place. The bar represents a stable, consistent joy in his life, and is an important theme to follow. Now, in chapters that take place in the bar, this theme is easy to track. However, once Richie is outside the bar, we should never let our readers forget just how important this place is to him. If the reader only experiences Richie’s joy while in the bar, it becomes less important in their mind.

Our first thought should be how to incorporate bar talk into his dialogue. This may sound odd, but think about how many terms we use for work purposes but carry into our regular life. People who work with Exacto blades and razors often refer to them as “sharps.” Mechanics use terms like “work area” and “bay” to refer to their garage. And anyone who has served in the military carries a whole kit of terms that we might not understand but they immediately tell us that person has served in the armed forces. A bar is no different, and whether Richie describes an iced tea as “on the rocks” or “taps” a milk carton rather than opens it, it shows how the bar has flowed into his life.

Another thing about bar owners – they work late, so they usually sleep late. This quickly plays into their idea of what morning really is, or waking up early, or a proper bedtime for their children. These traits linger, and whether the writer wants to have the character very much aware or totally oblivious to this different world, they need to tap the reader on the shoulder with a reminder of how this affects the character’s life.

Of course, none of these themes need to dominate your writing, just as none of the themes in your own life sit on your conscience 100% of the time. However, when they poke their heads up, they do more than fill in the character. They grab the reader’s attention, reinforcing an important part of the story. And as different thematic elements come together, they build up that character’s personal strengths, weaknesses, and tensions. That character will dominate the story simply because a few words were salted throughout the narrative.

But like salt, we need to mix it in carefully or it destroys the flavor. That’s what the next post is all about.

Posted by James Pressler at 3:24 PM