The Adventure Beyond the Story

Someone told me about the simplicity of stories. They explained it by telling me when Sir Edmund Hillary was asked why he wanted to scale Mount Everest, he famously answered, “Because it’s there.” Well, first, it was George Mallory who said that. More importantly, this was easily one of the most to-the-point explanations in the history of the Himalayas – it says everything that needs to be said with an economy of words, and also speaks volumes about the mindset of the intrepid explorer.

It is also a very boring story on its own. 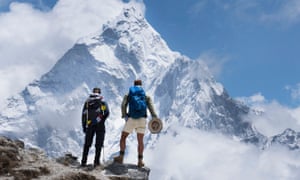 When we think of a story, we think of an adventure that goes from A to B to C and so forth, eventually reaching the final point. This is very efficient and accurate, and it completes the journey. There is nothing wrong with that style of writing, but it misses out on the opportunity to expand on the character and their adventure. Mallory made his point in three words, but what else do we know about him? The character is very narrow, and the reader does not gain the opportunity to see the person beyond the mission.

This should be where the adventure for the writer begins. As we write the story, moving from A to B to C and explaining the challenges along the way, we should think about how the character sees these things. If there is a choice about which way to go when climbing Everest, this becomes an opportunity to show what pushes the character one way or the other. The writer can show the options, explain the character’s decision-making process, and even inform the reader about past events that shape today’s choices. This is where we step beyond the story and make it an adventure.

Cheryl Strayed’s book, Wild, portrays a 26-year-old woman hiking the Pacific Crest Trail (PCT). It’s not Mount Everest, but it’s over one-thousand miles worth of travel on foot. The story about such a long hike would be interesting on its own, but would it really leave a lasting impression in the readers’ minds? How would that hike differ from any other journey? Plenty of people hike the PCT every year, so what would make this particular story stand out from all those other people?

This is where we look at the route from A to B to C, and find the parts that can turn the story into an adventure. Even at point A – hiking the PCT – we discover that our main character has no experience hiking. The reader should immediately think, “Then why are you doing it?” This now demands an answer, and something more satisfying than “Because it’s there.” At that point, the writer has an opportunity to fill in the reader about the main character’s damaged life, bad choices, and questionable decisions. With this kind of information, we can now head to point B and beyond with some idea of where this character is coming from.

As we reach each new turn in the trail, we feel more informed about why our character makes certain choices. We see her do something that no experienced hiker would do, but we understand that she is not experienced, and also that she thinks in the short-term. Now we know the character more, and even if we don’t agree with them or even like them, we understand them.

With all of this extra information, the biggest benefit is that there can be a payoff at the end. When the reader first sees this woman heading out, unprepared and clueless, on a hike that might very well kill her, the question is how will she make it? (It’s a memoir, so we know she survives) As the story progresses and the reader learns about the character, they should also see how the journey has changed them. A long hike is a bit of an obvious metaphor for a life journey, but still very appropriate, and the story should show her personal growth along the way. This way, by the time the reader hits the last page, they have not only read the story about hiking the PCT, but one person’s adventure toward realization and growth.

If you want to read about Mallory's adventure up Everest, well, he died up there, so there was no memoir telling the tale. If you want to read about Sir Edmund Hillary, read High Adventure: The True Story of the First Ascent of Everest. Cheryl Strayed has a lot of fan followers and sites for Wild (and a surprising number of detractors). But for the most informative story, think of literally any personal journey you had from A to B, and explore who you were at point A and what changed when you got to point B. That is where the adventure lies.

Posted by James Pressler at 3:27 PM