Knowing When the Story Ends

I recently re-read Joseph Conrad's short novel, Heart of Darkness; a special edition with author's notes in Conrad's own handwriting. Most people know this book as the basis for the movie, Apocalypse Now, which is enjoyable in its own right. Both works explore the madness that forms as foreign powers intrude on other cultures, as noble efforts become tyranny, and as rational people lose their humanity. However, one of these works knew when the story had run its course. Conrad didn't. 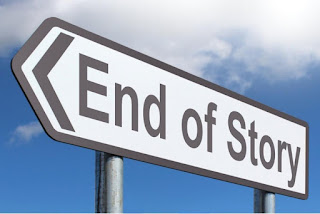 In defense of Conrad, Darkness came out as a three-part serialized story (as many famous stories did). Because of this, the structure was significantly different than it would be as a novel written as one piece of work. As a unified piece of work, the author could take a little time setting the stage, introducing Charles Marlow, the mood, and potential for conflict, then build up the tension and drama for as long as necessary, then hit the crescendo with the famous line (spoiler alert), "Mistah Kurtz - he dead." Then tie up the ends, send Marlow back to Europe as a changed man, and done. the bulk of the book would be one-hundred pages, the post-Kurtz part twenty at most. Rather, Kurtz died and there was still another piece to be told. This weakened the book (in my opinion), and watered down the impact. In a two-and-one-half-hour movie, Francis Ford Coppola killed spent the bulk of it leading up to the big moment, then off Kurtz, tied up a few points, and the credits were rolling before the body was cold.

However, this post isn't a scathing critique of Conrad or praise of Coppola (after he made The Godfather: Part III, I realized anyone can drop the ball). This is about knowing the story you tell, and telling the story you know. There are no hard-and-fast rules about this: the rival can die somewhere other than the end, the hero can go through greater challenges to learn the big lesson, and so on. The big challenge is to feel when the story you are writing has gone in a different direction from what you are trying to tell.

Let's look at a commonly read novel that was standard reading back in my school days: Upton Sinclair's The Jungle (a different jungle than Conrad discusses). Most everyone I know who read this will talk endlessly about the horrors of the meat industry at the beginning of the 20th century, particularly Chicago's Back of the Yards area where the Stock Yards once flourished. However, the story was intended to be a statement promoting socialism - the last one-hundred pages all but leave the meatpacking industry behind. Sinclair wanted to tell a story favoring socialism but instead established the groundwork for meat packaging reform. Most everyone remembers the first two-hundred pages then forgets the last one-hundred that were supposed to be the big rallying cry. In this regard, he failed as an author but your hot dogs are safer for it.

On another Chicago note, I offer Saul Bellow's Humboldt's Gift as a fine example of telling the story you know and knowing the story you tell. As readers, we know from the get-go that the main character, Charlie Citrine, is not on a good path, and his friend and mentor, Von Humboldt Fleisher, is not going to be around for the end of the book. Therefore, does Humboldt need to die in the last twenty pages? Nope. We understand that Charlie's redemption is the real story, and that becomes the part where the dramatic writing comes in. The dialogues with Charlie and Von Humboldt are wonderful exchanges, but the story could easily get lost in those parts and forget that Charlie needs saving more than Von Humboldt. Bellow keeps this very cleverly balanced, and the story pays off because of this.

The long and short of it is, whether the story is about sailing up the Congo or sailing down Western Avenue, Make sure the important parts are showcased, the side-trips add to the story but don't dominate, and the messages stay on point. If people read your political statement and talk about the meat industry, you've lost your focus.