"My life was going just fine when I came home yesterday; everything the way I wanted it, until I entered my house and discovered..." 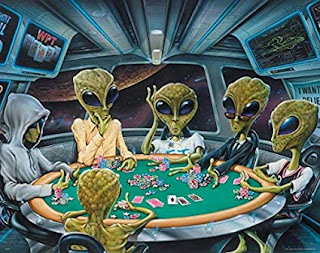 All of these would be perfectly reasonable ways to start a story (side challenge: write a short story starting with one of those lines). They fit the standard mold of a character facing change that sends them on an adventure. This is Act 1 of any story, and it works well. However, one thing they all have in common is the direction of the change. All of these stories offer an external factor that forces change upon the character. In this way, the character is forced down the path of change. What if this isn't the case?

Internal change can be a very dramatic method of storytelling, because it gives the character immediate ownership of their actions. In the examples above, change is forced upon the character and they have to react, then address the results of that reaction and so on. This is very representative of life so it's a good working model for a story. But what if the character starts from a proactive stance? The world doesn't kick the person into changing, but rather they start the process? Consider the previous example, but with a different close:

"My life was going just fine when I came home yesterday; everything the way I wanted it, until I entered my house and discovered nothing about my life made me happy."

This is an internal realization, and the change is driven by the character themselves. At this point, our main character decides to be the self-appointed hero, pursuing this elusive happiness. It may sound like a technicality, but the hero now bears all the burdens of each action. In the externally driven story, the hero is forced to act, creating the reasoning of, "I had no choice." The internally driven story means that the hero did have a choice to act or remain idle, and stepped up.

Internally driven stories are far more difficult to write because the responsibility is constantly on the character to push forward - it's their mission, after all. The world isn't chasing them around, they are making demands of themselves. However, by the end, the reader will behold a character that they know intimately, top to bottom, because they know how their mind works just as well as the writer. It is a challenge worth trying.

On that note, whether a story kicks off from internal or external drivers, the big concluding realization has to be internal. For any reader to have a satisfying experience, they have to witness the character's change and growth, which should culminate in that big "A-ha!" moment. The reader doesn't want to go through three-hundred pages to have someone else give the hero the treasure, solve the puzzle or shoot the bad guy. That's the hero's job - to have the big moment. The external examples above should end with the hero moving on after his failed relationship, learning how to not let his inheritance corrupt him, or play cards with the martians and his cat. If those situations conclude without the hero's participation, the results will be a disappointed reader.
Posted by James Pressler at 11:47 AM