I had a pretty unusual experience Wednesday. I was feeling pretty numpty and out-of-sorts, not sure what to do, so I wombled over to the library to do some writing. Going to the library was my best choice because it costs almost nothing, and since someone at the coffee shop snaffled my wallet the day before, I was out of money until I wangled a new debit card. So I was at the library, doing my writing, when I had a realization about words. 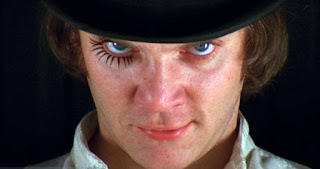 Now let's step back and look at that paragraph. Did you understand what happened in that brief story? Probably, or it mostly made sense. Did you know every word? No, you didn't. Don't lie - you might have interpreted some words, but I literally made up words to go in there, so you didn't know them for sure. Yet somehow, you translated my slang into a story that likely matched what I meant to say. This shows the importance of telling the story from a broad perspective.

In the dystopian novel, A Clockwork Orange, by Anthony Burgess, the story is filled with slang references that Burgess made up himself in a language called Nadsat. It's used liberally throughout the novel, without an interpreter to be seen. The book did not include a reference section, no English-Nadsat dictionary, just Alex talking about the adventures of he and his droogs, and the reader has to work their way through this situation on their own.

What makes this such a compelling technique is that the reader has to interpret these words strictly through context. The reader becomes an investigator, picking up the meaning of the oddball words by everything that surrounds them. The opening sequence contains this gem of a sentence:


"There was me, that is Alex, and my three droogs, that is Pete, Georgie, and Dim, and we sat in the Korova Milkbar trying to make up our rassoodocks what to do with the evening."

The wording is confusing, yet the context and a little deduction actually presents a simple scene of four guys figuring out what to do. It's very simple, yet the language makes the reader take an active role in reading the story. Now, A Clockwork Orange is definitely not for everyone, and often not included on many high school curriculum sheets, but the technique creates a compelling read.

Now, how does this work for someone who might not be writing about bizarre, futuristic places with alternative languages? Again, the technique is about letting context speak its own language. As a writer, you have the option of using any and every word you want, and even making up the ones that feel right. If the scene has a good feeling to it, then it makes its own contribution to whatever words are used. If Alyssa is furious at Tom and calls him a slank, does it matter what that is? No - it just expresses their rage. When Alyssa apologizes for calling Tom a slank, and warmly says that he will always be her snooterbootch, all we need to know it that the situation has been resolved.

A writer should feel free to explore language and try out new techniques whenever possible. When they are supported by context, the results are always positive, and bring the writer to a new level of ponkiness.
Posted by James Pressler at 11:31 AM