Sometimes, the simplest thing can spark a post, and I wanted to jump on this one while that hot little ember was fresh in my mind. The discussion was about the use of a particular adjective to describe a person. I had not noticed a problem the first time through. Then I read it again. And again. Again and again I went over it, and I began to really till through the grammatical soil to figure out just what made it seem off-beat. My final decision is that it was not grammatically perfect, but in that regard, it was brilliantly used and should stay in the copy. 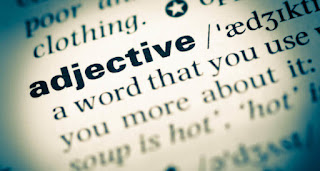 Just as a reminder, an adjective describes or modifies a noun. When we think of these descriptions, we start with appealing to the senses and offering colors, smells, textures, etc. Even this becomes tricky because often words require some context to make them work. Describing someone as having "dark eyes" might be simply understood as a color or shading. However, describing the antagonist as such, particularly while they are doing particularly nasty things, can give "dark" a different meaning. "Dark" becomes a mood, not a visual, and the scene changes. In some cases for the better, but the meaning has to be understood in terms of context.

At some point, our adjectives wander into the realm of emotional description, which is the fifth dimension of senses - things suddenly bend around and fit a little differently, they evoke different meaning, such as "dark" did in the previous example, but now the rules go in many directions. Let's look at some simple adjectives as they might apply to three nouns - a person, an idea, and an inanimate object such as a piece of cake (choose the flavor). See how these adjectives fit:


Do any matches seem obvious? I've known plenty of thick people (myself included), intriguing ideas, and delicious pieces of cake. However, can an idea be thick or robust? Can an idea be delicious? Can cake be exciting? These seem like odd match-ups, but the right context makes them work.

As I mentioned in the beginning, the first time I read a particular description I did not notice a problem. Why? I had read it in context, and it fit together in one flow of emotion. It wasn't grammatically perfect, but it served the situation. In this regard, let's go back to our list. What is evoked by describing a person as looking delicious? Cannibal jokes aside, such a description evokes a feeling that whoever is doing the describing feels a hunger toward that person. Is chocolate cake exciting? Describing a slice as such shows a very strong, positive connection between the person and the cake, as if it means more than just dessert. And I have heard all those adjectives used to describe ideas - even thick - as a way of incorporating secondary emotions and perspectives into a scene.

So, is the grammar clean? Well, it's not perfect. If you are doing word association and you respond to "cake" by saying "genuine," there will be questions. However, the wordplay surrounding such a description can make for a very memorable description that will sound fine even though it's not quite perfect.

Posted by James Pressler at 1:27 PM