The Pause That Refreshes

No, despite the headline and the picture, Coca-Cola is not sponsoring my page (yet). This post was actually inspired by a comment someone offered me regarding this blog that got me thinking. He is in the process of putting together his own blog about golf. The ideas and a theme are there, but he sees the task as being pretty intimidating. After looking over my blog, he said, "Dude - you have all these posts; it's like they never stop. Don't you ever run out of ideas?"

Without being too smug, I answered, "I ran out of ideas after two months." 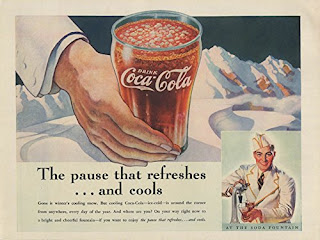 This is largely true, but of course there's a catch. Indeed, I started off with a bunch of ideas and a good amount of content, but that energy would only last so long. I knew there would be times where inspiration would be limited, someone's drama sapped my energy, I'm too sick to write, answerable to other obligations, and so forth. The bottom line is that while writing two posts a week does not seem like a huge task, sometimes that energy isn't there. And yet the posts are there, every Monday and Friday with regularity (except for special holidays). What's the magic ingredient? It's no secret - unlike the recipe for a delicious Coca-Cola.

In case the title didn't give it away, sometimes we all need to take a break from writing. Not everyone can write constantly. (Okay, a few people I know can write every day without a break, but they are freaks of nature - and they know who they are) The idea of taking a break from a regular schedule might seem to go against the grain of meeting a deadline, but hear me out. Taking a break doesn't mean stop being a creative person, and going back to writing doesn't mean just writing two posts a week.

I started this blog in April 2018, but I put it together in my head much earlier. For a couple of months I thought about what I wanted to say, topics I wanted to cover, and how I wanted to approach my audience. I started writing content long before opening the site, because I wanted to see if this was just a passing mood or something that would gain traction. I had about twenty posts already prepared before I opened shop.

Writers, just like everyone else, will hit a drought now and then, and I prepared for this. I gave myself permission to not create for a while if I burned out (I will address burning out in another post), but keep my mind open to the creative world. Sometimes that meant going for a walk and just looking around and breathing in the world without searching for the poem or story in the trees - just enjoying the moment while drinking a refreshing Coca-Cola. Other times I go to a museum or art exhibit - not to analyze or critique, but to take in the brilliance of others. (I recommend the American Writers Museum in Chicago as a nice bit of escape, and I believe there's a Groupon right now to cut down the cost at the door) During these times I am not a writer looking for inspiration, but a person walking through the world, catching my creative breath.

On the flip side, when the creative juices are flowing, I write. Not just my two posts a week, but also a few extra ones if I feel inspired. I wrote a four-post series on turning ideas into a novel in one sitting, which gave me two weeks of content. I posted twice a week, but did not limit myself to writing twice a week. I let the creativity flow like pouring a tall glass of Coca-Cola, and once that died down, I started looking for ways to catch my creative breath.

Being a writer doesn't mean writing constantly (except for the aforementioned freaks of nature), but it does mean being a writer at all times. However, we do ourselves a favor by occasionally putting down the pen and addressing the other parts of our creative self. We take the pause that refreshes.

And now I am going to get a cool, refreshing Diet Coke, and wait for the Coca-Cola sponsorship to arrive.
Posted by James Pressler at 11:43 AM