Last Friday's post was a discussion on the pros and cons of using different forms of dialogue, the benefits of internal versus external, and an aside to when narrating voice can take over for the spoken word. Definitely a lot to discuss, and maybe 800 words was not quite enough to get out all of the sordid details about dialogue's pros and cons. I thought it was a good start and a way to open up a conversation about the whens and hows of using quotes and narrative.

Then the IMs came in. 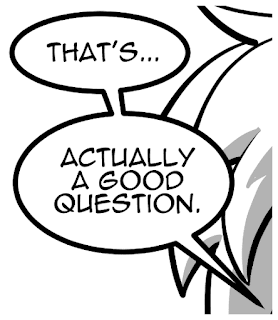 Nothing horrible, nothing toxic, but nevertheless some important points were brought up. I thought I would cover a few in particular just to highlight how things can be done in a few different ways, each with its own effect, or in some cases, with little effect whatsoever.

Let's say our character is working on some big, elaborate plan, and someone asks that character if they are sure it will work. Simple enough, so let's look at two possible responses, both in the first person:

These are the same sentences, with the exception being the punctuation and capitalization. However, there is a difference here, and while it might seem inconsequential, it's still worth pointing out. The first sentence is just a part of the thought process, and it would easily flow along with narrative discussion, perhaps even getting lost in it. The second sentence, however, breaks from the narrative flow by taking the reader into a moment of discussion, perhaps even preparing them for a run of dialogue about what might be at risk in this situation. In this case, the quote is actually a prompt for further conversation, and there had better be one, otherwise the reader loses the nice, steady narrative flow and has to reset that rhythm at the expense of a nice, continuous pace.

There's also another trick that can go on here, depending on how the situation in our hypothetical situation is playing out. Our first line is part of the narration so it does not necessarily stand out on its own merits. However, what if we want that observation to stand above everything else? What if something will go wrong a few pages from now, but we want to highlight our character's confidence that everything is accounted for. In this case, interrupting the narrative to offer a specific, word-for-word, detailed observation tells our reader that this one line is very important and speaks specifically to that character's mindset. It stands out, even though it is just one quote without a surrounding conversation. When it's played right, our reader sees that last part of the quote, "...what could possibly go wrong" and decides that this will be referred to just as something goes horribly wrong.

So, is there a hard-and-fast rule about how to do these things? Not a chance. These things are more style than rule, working for effect rather than following a specific mandate. In other words, feel free to play around with different ways, and see what happens. And don't take the IMs personally. They mean well.