I'll be honest - times have been tough. Not just as a writer, or as a pandemic person, but just as a human being in general. I think days like these bring about a personal need to relate to and connect with other humans, and just to feel like we are not alone in this crazy world. Of course, there are a lot of obstacles blocking our route to personal connection, and when these are too much to overcome, I pull out my favorite writing tool in an effort to tie myself closer to the human condition: The character sketch. 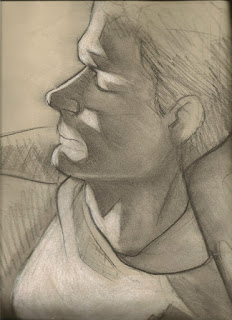 For a lot of writers, a character sketch is not a product that stands on its own, like an essay or a short story, but rather a means to an end. Often, an author will write up a few character sketches about people in their book so they can understand them better and get a good feel for their identity, but the work itself rarely sees the published page. However, I find it to be a very enjoyable exercise in exploring the world I already know and getting a better feel for just what I am a part of.

Here's how it works. Take a character and describe them (from their own perspective) walking into a room. Let's not worry about what kind of room they are walking into or why, but focus on what the character usually does when they enter a room. Are they nervous? Awkward? If they see people, do they look for friendly faces or try to fade into the background? Do they seek attention or avoid it? A lot of simple questions to explore, and each answer can then be built upon with further questions. Why are they nervous? Do they not enjoy social situations? Have they always been edgy around strangers or did a recent trauma change them? Does anxiety build up inside? Are they already entertaining thoughts about leaving the room, or are they trying to overcome that urge? Maybe this is a social opportunity that they want to take - why? Have they been alone for a while and miss the company of others? What drives them to this point?

Now take the same room and the same character, and describe what another person would see. Would they see a nervous person or an outgoing one? Is the character obviously tense, wringing their hands and shifting their eyes, or do they look relaxed? Of course, this is also an opportunity to describe the flesh and bones of the character, but this only really helps if they feed into the substance of who they are. If our character is well-groomed and attractive but looks uncomfortable and on edge, well, that's worth noting. We do this step to show the internal contrasts a character might have that would be important to show the reader. Furthermore, as an author we get a feel for this character's strengths and weaknesses. We explore how every step looks, how every move can be interpreted. It becomes a study into that character's existence. At this point we should start discovering some features about them that are worth showcasing.

At this point in the character sketch, we start writing about a simple interaction, and I mean simple with a capital S. Something like sitting in a chair becomes a study. Why that chair in particular - is it the closest? The furthest away from the crowd? Their favorite chair? Do they pull out the chair or move into it? Do they flop themselves down or politely take a seat? Good posture? Is it a relief to take their weight off? Do they exhale in relaxation, spread out on the chair and lean back, or do they remain rigid and bolt-upright? Is this what they usually do? Why or why not?

The best part of this exercise is not to write some gripping story - The Person and the Chair will not sell many copies - but rather to take a deep plunge into that character and analyze them from the inside out. If a writer is not sure about some particular aspect about that character, like how they would respond in an emergency, the sketch can be written as the character suddenly dropped into such a situation. The only rule is that the writer needs to focus everything on that character's thoughts, actions, and the interplay between the two. It's not a story, it's a character sketch. The only mission is to explore that individual.

I write tons of these, both to understand my different characters, and sometimes to examine interesting people I know. I have done character sketches of most of my friends (and I hope they never find those files), and plenty of people who I have seen but never met. Whether any of it is accurate isn't the point. It's all done in the name of exploring the character and giving them depth on the page that will someday pay off for the reader.

Posted by James Pressler at 1:41 PM