Now that the COVID restrictions are easing and a sense of normalcy is creeping back into the world, I feel it is time to remind writers about that fine art of people-watching, or in this particular discussion, people-listening. This innocent little exercise is something that helps us learn not just about writing dialogue, but how to avoid some of the differences between a spoken conversation and a written conversation. 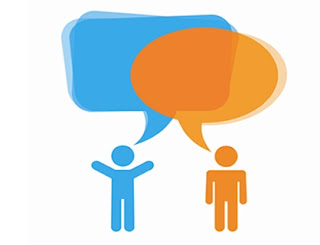 Admittedly, it does sound a little weird and perhaps even stalkerish, but there is real value to be gained from listening to other peoples' conversations. In these particular cases, the content is not the important part. Rather, the pivot turns on how natural conversation is usually a grammatical nightmare on a word-for-word basis, and how it has to be translated to be effective written dialogue.

A great source of this is courtroom testimony, which is transcribed as it was spoken - warts and all. You can read the testimony of a very intelligent person and realize that when they talk, they backtrack on their sentences, they throw in awkward pauses in the weirdest places, they often correct themselves half of the time then fill the balance of the sentence with other errors, and so on. When we read their spoken words, the people do not come off as intelligent. This becomes a problem when we set out to write something that is supposed to sound natural and real.

This being said, there is something to gain from paying attention to how people talk. First, while they may have all of the little shortcomings mentioned above, these can be opportunities to express something on the written page. People may speak in half-sentences that periodically backtrack on themselves when they self-correct, and we can omit those from our writing. However, the moment we include some little self-interruption, we signal to the reader a degree of uncertainty or doubt. We drop that natural note in there once and it immediately tells the reader a world of information. If we include it all the time, the reader just gets annoyed.

Pauses are something we always use with the spoken word, but will utterly destroy the flow of written dialogue. Rather, we can drop a few commas in to give a rhythm to the speaker's pacing and the reader gets a feel for the motion of the dialogue without getting held up. If an actual pause is required, a ellipsis (...) does a lot of heavy lifting, but should be used sparingly. Again, we want to make sure that the flow of the conversation is fairly smooth, and that the occasional ellipsis is used sparingly so it has a dramatic impact.

Of course, there are all those words and phrases, people use in conversation that are taboo in clean writing: like, well, kind of, you know, basically, and so on. Key in to a conversation and feel for how often these words are used. It's not pretty, and they should largely be kept out of natural dialogue. However, dropping one or two of them into a particular character's pattern gives their dialogue dimension, and they stand out. In conversation sections, readers immediately recognize who is talking because of how often she uses the term, "like, y'know," and they engage a little deeper.

And on that note, I am off to do some writing, preferably in a fairly public place. After all, those strangers need someone to listen in on them - it might as well be me.