Jargon vs. Cliches: The Good and Bad of Familiarity

During my years working in economics at a Chicago bank, I heard it all. "Look at the financial hot-shot up in the big leagues," "Never thought you'd become an investment big-wig," or "You must be making money hand over fist." In those twenty-plus years, every possible combination of words was used to describe what I did. Most of those words and phrases had been used since the Great Depression, and very few of them were accurate.

(Editor's note: I never was even a shot, much less a hot-shot; I did not work with investments; despite my lack of hair I neither owned nor used a wig; and trust me - economics is not the place for hand-over-fist money.) 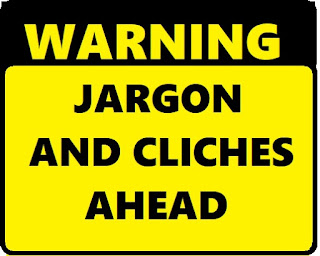 The thing I disliked the most about all those sayings, however, was that I heard them all before. They were boring. They are the phrases people use when they don't have anything informative to offer. They are overused, useless bits that no longer have any tread on the tire. They are cliches, and they will sap the life out of good writing.

We hear these sayings all the time, so much so that they feel very natural in conversation. However, our day-to-day conversation is far different than writing. In writing, our mind examines sayings and phrases much more, and the weak ones become distractions. (George Carlin's NSFW discussion of Expressions and Sayings is a nice example of what our mind will do with cliches), Rather, our writing should still sound natural but use word choices that stimulate the mind rather than numb it.

Of course, cliches have their place. If you are writing about the economist who has to deal with a bunch of people who have no clue what he does for a living, the cliche is the best tool around. Packaged phrases, as I mentioned, " don't have anything informative to offer," so if that's what needs to be communicated, then use them.

This now leads us to jargon. If cliches had a cousin that actually did something with its life, that cousin would be jargon. The two are very much the same - commonly-used phrases that show up everywhere - but jargon has the special quality of communicating very detailed information; even information beyond what the words actually mean.

My colleagues in economics had jargon showing up in everyday conversation. If we had extra money, we would say we were "long on cash" (a reference to financial positions). Using our savings to pay for something became, "drawing down some funds" (investment lingo). We would throw around terms like arrears, servicing schedules. and structural positions without any regard for those around us who might not know that part of the English language. To economists, these terms are common, but that is their value. That is why they are jargon.

While cliches provide no information, jargon provides information beyond the words. If someone asks to borrow five dollars and I say, "Sure, I'm long on cash this week," that describes more than my financial situation. As the reader goes over that, the mind examines it, explores it, investigating the context to understand the meaning. The words tell the reader about my financial mind and my ingrained feel for the financial world, and that pours out into everyday conversation. Jargon fills in a lot of character detail by showing the reader where their mind is. In that regard, jargon is priceless. (Google "corporate jargon" and check out the 150,000+ hits on it).

Think of our political environment these days (I will keep this non-partisan). Every politician likely has been given a nickname by a rival, and each party has derogatory names for the competition. Whenever a person uses one of those names, they secretly communicate just what side of the argument they favor without actually saying it. Jargon becomes a secret handshake, a subtle acknowledgement of affiliation that pours information onto the page without using three paragraphs to do it.

Whenever you write a character, incorporating jargon is the quickest route to making that character multi-dimensional (ask around and do some investigating if you don't know some phrases). Familiar words and terms put real meat on the character. Cliches, however, will flatten out the character's depth.

You can bet on that.
Posted by James Pressler at 11:29 AM