Writing from the Reader’s Perspective

Creative types sometimes need to get away, so that's what I did recently. I went off the grid, spending a little time at the exquisite Harbert House Bed & Breakfast, disconnecting so I could find the rest of the real world: Reading, conversation, and catching up with things and people I didn't know I had lost touch with. And in this process, I started remembering an important part of writing – the reader. 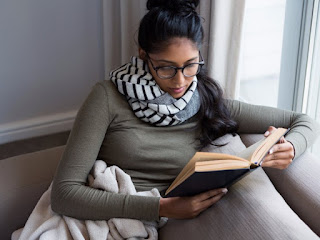 Let’s face it – writing goes nowhere without considering the reader to some extent. As writers, we can indulge ourselves in all kinds of storytelling, but once our words go into print, the reader either joins us on the adventure or turns around and goes home. While the stories are ultimately ours to command, shaping them in a way that appeals to our audience is important. This is not about compromising the story or changing it to fit the audience, but rather using all the tools and tricks available to draw our readers into what we present them.

I had the privilege of sitting down with a book group that my novel, The Book of Cain, writing, and the creative process. This also gave me the opportunity to get some insights as to what appeals to devoted readers, and what turned them away from a book. Maybe not so surprisingly, writing style featured prominently. Here are some of the takeaways from these avid readers.

Genre should be up front. Every writer has a bunch of friends who they know would love The Dunwich Horror, and also a bunch of friends who would hate The Dunwich Horror. Needless to say, it falls under the horror genre, and that will draw or push away readers. There is nothing wrong with scaring away a demographic who does not enjoy a genre – it’s helpful, and it also attracts those who enjoy the genre. However, the biggest mistake is selling a horror story under another more popular genre in the hopes of drawing in a different crowd. It can bring in a few new readers, but it usually creates far more disappointed readers, and trust me, there is no harsher and more vocal critics than disappointed readers.

Style needs to be unique, not perfect. You know those people who will wear a sweater vest, a boater hat and carry a walking stick, and people are just drawn to them? It’s more than just their brave and perhaps outrageous sense of fashion; it’s the fact that they stand out. Is it impressive? You be the judge. But people take notice. People ask the man in the boater hat, “Hey, what’s with the hat?” At that point, a conversation has started and the mission is complete. Writing style is the same way. Writing doesn’t have to be the perfect suit-and-tie look. Anyone and everyone can do that – and they often do. No, writing style is how to create something unique; a voice that people remember. I have talked at length about Lester Lusker, the main character from Bughouse Square, and how that Mississippi drawl as thick as grits and syrup fills every page. It’s an editor’s nightmare, and it sticks in the reader’s mind. It’s amazingly, consistently imperfect, and it stands out for that reason.

Connectivity. Those first pages should communicate something that makes the reader think. If it’s about the loss of a friend or family member, the writing needs to make that chord resonate. Action/adventure – same thing, but more difficult. The reader needs to see some aspect of themselves in that person, or something that they want to be. Allan Quatermain might have lived in a fantasy version of 19th century Africa, but this roguish hero connects to people in 21st century Chicago. If that character does not connect with the reader on some level in those first few pages, the reader won’t have much reason to continue.

One member of the group pointed out the feature that grabbed him every time: In the first few paragraphs, the narrative should place a question in his head. Even a simple thing such as wondering how the character got into such an awkward situation, it drives the reader forward, seeking an answer. Does that question have to be the big question of the entire book? No, it just has to draw them into a meaningful part of the story, and take them into the adventure.

One last thing that can’t be emphasized enough: The first three-hundred pages of perfect writing can be ruined by the last ten pages of bad writing. In short, the conclusion has to be a sensible conclusion to every plot twist, every character development, every noun and verb. Of course, if there is a surprising twist at the end, that’s perfectly fine. However, it should be an “OMG!” moment, and not a “WTF!” moment. If it turns out the main character is the bad guy, that reveal needs to come with enough evidence already presented to make the reader connect the dots in a new way. A well-written story will turn those dramatic twists into parts where the reader will turn back a few pages and realize the clues were hidden in plain sight. Anything that seems overly rushed or hurried will disappoint readers (and viewers, in the case of Game of Thrones). The big points, no matter how dramatic, have to be earned by the previous pages, or all the readers who read your book will be reluctant to read your next book.