Readers often walk into a story with very little information other than what is on the book jacket, and maybe some positive reviews. Once they are introduced to the characters, they make some quick decisions about who they are and how to approach their narrative. There are a lot of ways to categorize, but this post discusses a simple way for the writer to approach their presentation to the readers. 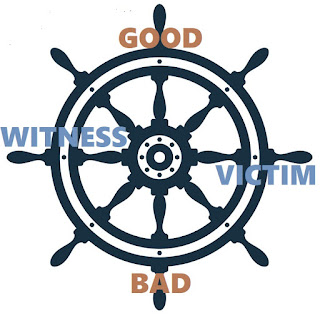 As writers, we should know ahead of time whether a particular character is going to contribute to the hero's ultimate goal, or detract from it. Most may only have minor contributions, but any character worth including should shape the journey somehow. If not, why are they there? This gives us two camps - the Good and the Bad - and I will emphasize that these are not moral valuations. Good strictly means contributing to the final goal, while Bad means being an obstacle. A story about people preparing for a bank heist suggests that most characters are morally bad, but for now, the Good ones help the plan for this heist, the Bad ones detract from it.

While characters should fall on one side or the other, perhaps their roles are more important not because of how they move the journey, but how the journey moves them. If they are deliberately disengaged from the story and its changes, we can call them Witnesses. These characters relay information, connect plot points, and provide transition, but they stand apart from the journey. They can contribute to the Good or Bad side, but they are more detached than anything else. In contrast, we have the Victim. These are the characters who are changed by the story. Being a Victim doesn't mean they have to be killed off, it just means that as opposed to the Witness, who acts upon the story, the Victim is someone who the story acts upon. Indeed, what happens to the Victims should motivate the Good and Bad characters to further their ends. Witnesses and Victims both need to offer change to the main characters, but their contribution will come from a different direction, depending on their camp.

This gives us a character wheel of reference. Any individual at any point in the book can be placed on this wheel. The minor characters might be fairly close to the center - not too Good, not too Bad, or the story only acts upon them a little bit, versus what we see on the protagonist. If the writer has a problem taking the character off of a particular page and placing them on the wheel, well, maybe they need to understand the character better.

Maybe you've noticed I specified the wheel represents the character at any one point in time. Well, that's where "The Turn" comes into play.

In good stories, the characters grow and change, their journey influencing them in countless ways. Who they start off as should be quite different from who they are at the end. The character on page one might sit on the exact place on the wheel as the character on the last page, but in between, that point should move. That's where we put in "The Turn."

When a major event comes up in our story, we should imagine that the wheel, with our character firmly planted, suddenly rotates. The position turns around, and the character is moved from Good to Victim, or from Witness to Bad. A larger rotation could move the character from Good to Bad, going through Victim along the way. The go from Victim to Witness by passing through the Good route. This represents the kind of change readers respond to, because the change forces the reader to recategorize the character.

In the simplest version, think of what turns a good person bad or a bad person good. When the wheel turns, a character going between Good and Bad goes through either the Witness role or the Victim role. A criminal loses someone they love and turns their life around is the Victim route, while the Bad person seeing the error of their ways would be the Witness route. The writer needs to know which route the character takes so the reader knows how they changed.

Think of the standard vigilante origin story: person becomes quiet crime fighter. Depending on where this person starts and ends on the wheel, the reader will be informed in a different manner. Take a character as someone who is mugged, then takes matters in the own hands. If their subsequent actions work against the main story or the protagonist's values, they move from Victim to Bad, but promoting the protagonist would move them to Good instead. And yes, they could move all the way around to Witness, informing the protagonist but detaching themselves from influencing the outcome.

The wheel is a nice instrument to track how a character changes, and keep the writer on their toes. Furthermore, as the writer tracks the character's development around the wheel, they know how to enhance the reader's experience and engage them in the story.