Stories Can Turn With One Swing

I am not a big fan of boxing, nor do I follow it on a regular basis, but one of the best lessons I ever learned about writing actually came from one fight. I know a good story when I see it, and dissecting it reveals what makes it good storytelling. In this case, it's a good story turn - where the hero, facing insurmountable odds, every possible obstacle in their way, turns the tide and wins the day. That turn is critical to the entire story. If it isn't believable, if the writer doesn't sell it, the whole story is ruined. 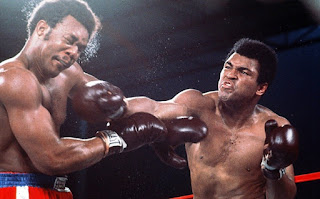 The fight was the 1974 Ali-Foreman bout in Zaire - The Rumble in the Jungle. (Expertly discussed in the Academy-Award-winning documentary, When We Were Kings.) You don't need to know about boxing to understand why this story is such a great example. It's the story of Muhammad Ali, a boxer trying to reclaim the heavyweight title. However, the reigning champion is George Foreman, seven years younger and far stronger than Ali, with a reputation for utterly destroying his opponents. Ali was the underdog, with Vegas odds sharply against him. It's amazing that he won.

While everyone enjoys the underdog story, the victory needs to be for a reason the reader can buy into. If the underdog just wanted it more, do we buy that? Whatever the goal is, clearly everyone wants it. The reader has to feel the struggle, fear the inevitable defeat, and then buy into when the story turns.

In the Ali-Foreman fight, Ali started out aggressively, trying to use speed and dexterity to dance around Foreman's devastating punches. A nice start, but then Foreman stepped up and started showing why he was the champion. He cornered Ali so all that speed meant nothing. Ali made it through the first round, but we fear all his talent might not be enough.

When our story places the hero against the ultimate adversary, we just need a seed of hope to keep the reader excited. The story can beat up the hero for a while, but as long as that seed exists, the reader presses forward. The reader wants that victory as much as the hero does, and it's that bit of hope that gets them there.

In the second through fourth rounds, Foreman went after Ali. Ali gets pressed against the ropes all the time, Foreman swinging away but not landing any good shots. Ali was on defense, deflecting the swings then getting a jab or two at Foreman. Our underdog faced three times more punches than he threw, but got out every time without taking a bad hit. Ali wasn't winning, but he's already made it through four rounds. Foreman's last two opponents were gone in the first two rounds. That hope grows.

When our hero turns the tide, it should be something that was quietly evident all along. If they figure out a puzzle, it should be from a hint they got several chapters back but didn't think about for a while. If they track down the criminal, it should be a clever analysis of evidence already presented. If things just change without a reason, the reader feels cheated. They want to know there is a purpose for the shift.

In the fifth round, Ali started landing a few punches, and Foreman wasn't moving as quickly (plus he had a cut above his right eye that Ali kept targeting). In round six, Ali let Foreman put him against the ropes, but Ali was resting while Foreman was exhausted. By the seventh round, Foreman's punches were weak and Ali turned aggressive. That's when the turn hit. We realize Ali had been playing defense all those rounds to sap Foreman's strength and energy. This strategy, known now as the Rope-A-Dope, had played out before us for the whole fight but we only realize it once Foreman was staggering. Then Ali's eighth-round, five-punch combo put Foreman on the canvas, and our underdog is victorious.

When it's done right, a reader feels excited with the outcome - they enjoy the entire experience and feel it is a genuine, complete experience. There is a sense of satisfaction in a proper turn, and the story will stick with the reader long after they put down the book.

The Rumble in the Jungle was 45 years ago and people still talk about it. What does that tell you?
Posted by James Pressler at 10:07 AM