My last post was about writing horror, and even though I poured a few more words than necessary into the discussion, I only scratched the surface. There are a lot of routes to horror, and they all revolve around fear, discomfort, and encountering those things we would rather walk away from. These can play on childhood nightmares, personal phobias, the aftermath of trauma, or the gripping threat of the unknown just around the corner. Horror seems like an elaborate genre, and it can be if you want. However, when it's boiled down to its core purpose, it is very simple. 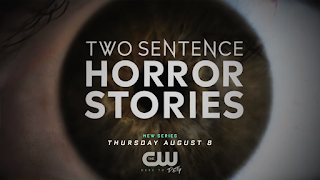 But first, a tangent to poetry. I often recommend new writers try poetry, but specifically haiku. These are 17-syllable poems - no more, no less (usually). There's plenty of information about this form on the internet, but here's the takeaway I offer writers. Haiku teaches about writing in its most simplistic form. It is a discipline, expressing thoughts and emotions with elegant twists with a minimum of words. When people learn this kind of focused writing, they go straight for the values they want to discuss, forgoing all other points to hit that one point. It's an art, and a valuable lesson for writing any genre. Ernest Hemingway said his best story was six words: "For sale: Baby shoes. Never worn." Not even enough for a haiku, but it still tells a story.

How does this relate to horror? For several years there has been an internet fad called "Two-sentence horror stories." (enjoy the link, apologies for the grammar - it's the internet, after all) This is as simple as it sounds - write a horror story using no more than two sentences. Some of these sound more like intros to horror stories, but they use the same technique. The writer targets the moment, creates fear through insecurity, etc., and twists things toward the unknown.

(Note: The CW network recently released a series called Two Sentence Horror Stories [pictured above], with each episode a twenty-minute horror story based on one example from the title. Watch it on Netflix if you want, but turning a two-sentence story into a twenty-minute episode is hardly an art form. Writers should think about taking episodes and turning them into sentences.)

Let's look at one of these quick little stories and see just what is there:


"I texted a stranger by accident. But when they texted me back, they used my full name."
- Author unknown

The first sentence is simple. It establishes an innocent, even relatable premise that offers no immediate threat. It is calm and unsuspecting. The second sentence, in turn, destroys those structures. The innocence of the moment - gone. Relatability turns into fear. The threat emerges as an imposition on one of our personal needs - privacy. The stranger is now an invasive presence. This creates the fear necessary for horror, with precision and brevity. (and a little rewriting could make it into a haiku.)

As writers, when we get the inspiration for a story - any story - we need to understand it from a very basic, very simple level. Whether it's a character sketch, a novel, an essay or a poem, we should be able to express its purpose in one concise sentence. Furthermore, we should be able to create interest in that story in fifty words. If we can't do that, we either need to work on our technique or find the real story.

Practice brevity, then let feelings rise from words into the reader.
(that's another haiku)
Posted by James Pressler at 11:59 AM