Recently, I received an offer to discuss the appeal of horror, both in writing and in the the movies. Exploring this subject brought out a lot of ideas and opinions, so I thought it would be best to share a few of the insights as it applies to writing. Even if you don't write horror, there are some little nuggets here that any writer can benefit from. 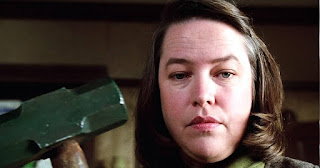 First, some ground rules. Horror doesn't have to be about violence. A common first association people make with the subject is with horror movies, particularly the violent and bloody ones. While these do count as horror, graphic violence is the low-hanging fruit of this genre. Line movies, stories that dwell on the blood and guts miss a chance to get into the real substance of horror. In Stephen King's Misery, there is a fair share of violence, but the horror comes from the disturbingly unstable tormentor, Annie Wilkes, and the physical and emotional struggles of our broken protagonist, Paul Sheldon. The horror comes from his increasingly desperate situation. The violence just enhances the subject matter.

This is an important realization of horror - the protagonist is in a place, position, or circumstance where they do not want to be or do not understand, and the more severe the disconnect, the better the story. If a person wants to be in Chicago but is in New York, well, that's something, but not much. However, if that person had a past trauma in New York, the story gets somewhere. If the circumstances involving that trauma come back to visit that character, it gets closer still. If they might have to relive that trauma, this evokes fear, which is the root of horror.

But does horror demand things like trauma to be effective? Yes and no. Horror does not demand a walk into the dark side of the world, but it does require a strong sense of fear, particularly fear of the unknown. This unknown should be something that the reader can at least accept, if not intimately understand, and it should be something that draws out an emotional response. Many people don't know their neighbors and don't care, so they might not immediately react to a story about the creepy guy next door. However, people can relate to strange sounds in the night and odd events that can't be explained through everyday events. This draws the reader's interest, and they read on. Then the character discovers things that suggest something very bad, and they realize they now live next to someone they do not want to be next to. Now they are in the situation they do not want, and horror can grow from this.

Horror often relies on suffering, torture and violence because these are clearly situations people do not want to be involved with. However, the true horror may come from how a person fails to handle the situation, or even tries to escape it, only to make it worse. Mary Shelley's Frankenstein: The Modern Prometheus demonstrates very nicely how Dr. Frankenstein creates his own tragedy by creating his monster then abandoning it in disgust, only to set off events that make his life quite horrifying. Here, the horrible situation is not about creating life, but about trying to escape a situation he was responsible for.

At its core, horror is about a character witnessing or becoming a participant in something they cannot understand, or better yet, fear. If the character is helpless to redirect that world, then the horror can come from the tragedies they are forced to see but not prevent. If they are an active participant, they have to face increasing discomfort with their actions, and the reader must feel this. Horror is about discomfort if nothing else, and as the character goes through it, every word needs to make the reader share that experience. The violence doesn't even have to be there if the reader is already on edge.
Posted by James Pressler at 11:42 AM