I first heard about NaNoWriMo several years ago as part of a casual conversation in a writing workshop. Some writers sounded so enthusiastic about it that I just had to lean in for details. I had no idea what it was, but the excitement infected me. Was it a new writer's aid like Grammarly? Some cool trend in the world of publishing? It sounded hi-tech and intriguing - was it the formal name for the next iPhone (which at the time was a new thing)? I had to know. 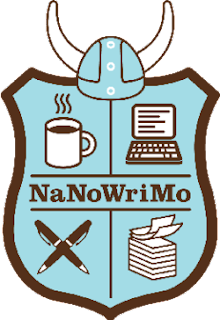 As it turned out, NaNoWriMo stands for National Novel Writing Month, which comes every November. It wasn't a new phone, but I was now drawn in from a different angle. Write a novel... in a month? That's fifty-freaking-thousand words at minimum! Impossible! That can never happen! It's some kind of social-media thing, like the old Ice Bucket Challenge or that thing with the spoonful of cinnamon. There's no way any sane person could...

Then I thought about how much I wrote. Little stories, character sketches, poems, stuff like that - how many words did I usually produce? Well, not two-thousand word a day, which would be required to meet that goal, but maybe that wasn't ridiculous. If someone suggested I set out to walk three-hundred miles in a month, it might sound ridiculous, but how many was I already walking every day? Suddenly, it's not as alarming.

To be honest, I am not trying to sell anyone on officially entering the various online NaNoWriMo contests online. Hundreds of thousands of writers enter and participate, which is great, but it's not mandatory. What I believe in is the broad idea that setting a big goal like that is a great way to complete that first novel. Setting word requirements for a day or a week and keeping personal accountability are the first steps to reaching that big goal.

Ever have a friend who sets out to run a marathon? I do. She set that as a one-year goal and stated it out loud so she would have to answer to us. Then she started her runs - a few miles here and there, with regularity, with some friends. A 5K here and there, then a 10K, stretching it out bit by bit. She became a runner, we held her accountable, and she ran that marathon. Now she does the triathlon thing, and that statement she made so long ago doesn't seem impossible - it seemed inevitable.

If you choose to do something like NaNoWriMo, or just write a novel in a one-month burst of energy, I applaud you. I can only offer these bits of advice that might make your run more manageable:


Everyone has that natural compulsion to rewrite sentences and reshape conversations to get them just right. Stop it! For now, just write. It's a first draft, and it's only a first draft if you complete it. Save the editing hat for another day.


Writing a story from stem to stern is an evolving process where you will learn about the character, have ideas, incorporate details, and so forth. By the time you type the last word, you will need to reshape the rest of the work to incorporate your discoveries.


When you finish your first draft, give yourself a whole lot of credit. You will have done what most people never accomplish. Brag about it. It's not perfect, but it's better than all the books that your friends never wrote. Celebrate the win, then start fixing it.

And if you want a little inspiration, read Julie Murphy's Side Effects May Vary. It's a great story about a dying teenager tying up the loose ends of her young life, then managing the consequences when she discovers she's going to live. It's a fun read, and I hope it becomes a movie. And it was a NaNoWriMo project.