The Process of Writing

I've done a lot of talk about writing lately, so this time I would like to go a little bit into the process; in particular, the part of the process where we see how far we have come in our writing journey. This is surprisingly difficult if we don't give ourselves the opportunity, and beneficial if we take that moment to sit back and take in all that we've done. 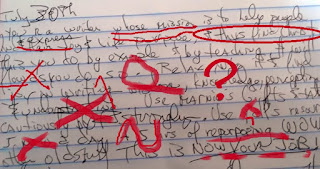 My first job after college was in the economic research department of a large Chicago bank. While there were plenty of wildly varied tasks to take on, the most difficult one to me was research writing (possibly the exact opposite of creative writing). It had technique and structure, a systematic layout of points and principles, and the financial side had a distinct lingo that had to be in there to let other people know you were one of them. All my writing in college had barely prepared me for this, so there would be a learning curve to climb. A big, steep, El Capitan-like climb.

The first part of learning technique was being able to take a punch. My boss reviewed the draft of my first research piece, and sent it back with more red-ink corrections than actual toner. It was dejecting, but I did not quit on the spot in humiliation. Rather, I remembered that every red mark, every strike-through, omission and rewrite was a step to learning my technique. I made the corrections, thought about the errors, and moved forward. Also, that draft became the bottom layer of what I would call "the Stack of Shame." It was my reminder to do better, but it turned out to be so much more important.

Sure enough, the next report got hammered as well. And the next, and the next, and the next (do you see a trend?) So many corrections, so many opportunities. Sometimes I would type up a particularly large report and bring it to my boss with a red pen attached to the copy so she had a backup after the first pen ran out of ink. I would try and learn from every edit, and the Stack of Shame would grow, reminding me that I still need to improve. It was difficult.

I took pride in my writing, as anyone should, so it was difficult to get anything back with red ink on it. If I used a comma that should've been a semicolon, that correction in red stood out from the rest of the page. For an up-and-coming economist, it was frustrating to make mistakes that would be remedied by a basic high-school education. The Stack grew, and my patience waned. Maybe it would just be a matter of time until my boss told me, "Maybe research writing just isn't your thing."

If my boss was preparing to toss me in the dumpster, she didn't show it. She gave me more assignments, more writing, more responsibilities that involved me putting words to the page. Maybe she accepted all the copy she would have to proof as a fair trade-off, or maybe they were secretly interviewing for a replacement who would work for the salary I made. Whatever the case, I tried to be better, and the red marks continued.

At my one-year anniversary at the job, I picked up my Stack of Shame. It was two inches high - hundreds of pages of copy. If felt particularly heavy - maybe all the red ink gave it a few extra pounds, or it was the guilt of having so many mistakes in the same place. I looked at that first work, then flipped through the pages, enjoying the breeze from pages of failure.

That when I noticed the red ink. Yes, there were corrections, but as I flipped through, I saw the quantity diminish, the size of the rewrites reduced from sentences to clauses to words. I saw my writing... improve. Yes, the errors I made were still errors, but my critical mind focused on those slips rather than the paragraphs of clean writing. I wasn't perfect, but as I looked back, I had the opportunity to see the gains I made. I reread that first report and was shocked to see that I recognized the errors immediately and knew the remedy. My fixation on errors made me lose track of the fact that my writing was, at times, pretty damn good.

Long story short, part of your process should be occasionally looking back at what you've done. Read your old stuff, and appreciate how far you've come. Even old stuff will have good parts, but hopefully you will see how a paragraph can be rearranged, a description can be tuned up, or how you could've avoided the passive voice.In time you will see how you've grown.

So, an important part of your writing process is to realize that you are a writer, and becoming a better one every time you put words to paper.
Posted by James Pressler at 12:08 PM