Philosophical Fiction: Not As Boring As It Sounds

I paused before starting the title with, "philosophical." Just the sight of the word makes people sigh in exhaustion. The mere thought of discussing philosophy and the higher meani... Whoops, I fell asleep just typing that. The point is, it's not a very sexy subject. However, there's a branch called Philosophical Fiction that allows for some fun that is difficult to find in standard story-telling. 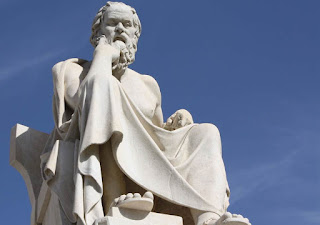 Yes, I know - I just used philosophical and fun in the same sentence, but bear with me. The usual story structure is to present a hero, introduce the challenge that calls them to action, the obstacles they face during the journey, the concluding moment, and how they have changed afterward. In this structure, the challenges and obstacles impede the character from reaching that goal, and they push past them while perhaps learning something along the way. Very satisfying. Now what if we put a little spin on it?

Have you ever taken a philosophy course? Usually, those courses left me with more questions than answers. Ever ask a philosophy grad student a question? Pack a lunch, because that answer is going to be a long one, and it might not even be an answer in the end. However, there is value in this. Not getting an answer is rather disappointing, but exploring the problem that underlies the question in the first place sometimes provides its own adventure.

Let's apply this to fiction. In philosophy, larger questions are discussed in order to inform, along with a lot of hypothetical situations where there is no one right answer, but each decision presents another set of issues. Consider the simple question of whether it is right to steal a loaf of bread to feed a starving family. This becomes a moral debate about laws of man versus what is right on a human level. Well, Victor Hugo incorporated that into Les Misérables as a play on morality (along with many other themes), and Jean Valjean became a symbol for the injustices of the world (19th-century France).

Now, Hugo took a side in Les Misérables, but that's not always necessary in philosophical fiction. The point in this style of writing is to explore the outcome of a particular action, for better or worse, and the complications that ensue. We take the basic structure of a story and turn it sideways. The inciting event and call to action might be an event where the character makes a choice and then deals with the consequences, for better or worse. Perhaps there was no right answer, just the least-wrong answer. The character made a decision and now has to live with the consequences.

Philosopher Philippa Foot developed a situation famously known as The Trolley Problem. A passenger is on a runaway trolley car that will hit and kill five people on the track ahead. The passenger, however, can pull a lever, which switches the car onto another track where only one person will be killed. There will be death, but if the person acts, they can save five people but their choice kills one person. Maybe this is a simple choice, but how does that person go on afterward?

From that horrible event, we now have character conflict - internal for sure, but plenty to go around. Obviously, this person needs to reconcile themselves with having killed someone. Even if others were saved, the funeral is still a sad one. Also, does our character now think that sometimes it's okay to trade one life to save many others? Is the value of the individual somehow diminished in his mind? Maybe this character was a counselor helping people sort out their issues, but now they seem meaningless in comparison to saving more people. Perhaps things take a dark turn, and our character realizes that pulling the lever on the trolley, killing one person to save five, could be repeated by killing organ donors. Those organs could save more lives - just like that lever - so murder was justified.

Philosophical fiction doesn't need to be some characters just talking about ideas that make people fall asleep. It is the exploration of a situation or idea, examining the different perspectives and showing how the character changes and grows. In that regard, it's just like storytelling, except the conflict comes from ideas and the ambiguous idea that there is some universally accepted "right thing to do." These stories often leave the reader thinking about the story long after they've put down the book, which is the greatest compliment for philosophical fiction.

You can wake up now.