The Story I Never Wanted to Write

A number of posts on this blog are quite emphatic about the importance of writing even when it's difficult. Putting words to the page helps us grow as people as well as writers, so we should always be challenging ourselves in that regard. I also spend plenty of time reminding people that resistance is a good thing because it is a sign we are not just doing the same boring stuff over and over. When we write, we grow, so when we grow, we write. In general, this is good advice.

However, for eighteen years, there's one story I haven't even tried to write. 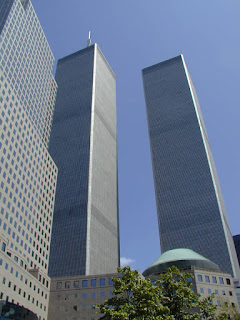 Any event in our life is potentially the source for a story. If it's just a random moment, there's no guarantee the story will be particularly interesting. We spend about one-third of our lives sleeping, so those moments are boring based only on the facts on the ground. Rather, we choose the moments that stand out, and build out a particular theme from that occasion. As we grow as writers, that story comes from a deeper, more intense place, where the actions and descriptions are set to an emotional rhythm. The story grows in intensity. That's the part I worry about.

Maybe you figured it out by the timeline I laid out for this, or more likely by the picture included in this blog, but the story I don't want to write involves September 11, 2001. That one morning, that simple blue-skied Tuesday still remains unsettled in my writer's mind. I have written about many personal experiences of pain and suffering, the loss of loved ones, the mistakes I've made and the scars they've left. That one moment, however, remains unapproachable.

Perhaps this story is so tough to write because it's so public. Every part of the world saw the same pictures, heard the same reports, watched the same footage in disbelief. Maybe this is something I don't write about because it doesn't feel like my intimate memory, but the world's memory. Why would my moment in that tragedy be worth reading? People lost friends and loved ones that morning. Entire companies were wiped out in one explosion, hundreds of first-responders lost when the buildings collapsed, families destroyed, dreams vanquished by the thousands - why would the testimonial of one balding economist in Chicago shuffling into his corner office at eight in the morning be worth reading about compared to the human tragedies all around?

The other part is the emotional experience. Writing isn't just relaying events and relative details; that's journalism. The art of the narrative is to see an exciting moment and tell people why their heart beat faster. As I saw hundreds of plane passengers instantly turned into casualties like some nightmarish magic trick, rebroadcasts showing it over and over, my heart sank. To write that story is to see those passengers killed again and again. However, when it happens in my mind, I also experience the screams no survivors ever heard. I see panicked faces nobody saw from the street.

A story touches readers when it relays humanity. That terrible morning was as public as can be, but billions of people each had their unique experience. Think of your moment that day. Did you cry, or were you too stunned? Did you comfort others, or were you shaking too much? When did the reality sink in? Did it ever? Who was the first person you hugged, and held, just to let them know they weren't alone and that their humanity was valuable? How long was it before you screamed in rage? What did the hate feel like? Did your darker angels demand eye-for-an-eye revenge? Did your heart harden for just a moment? How human did you feel that day?

This is the story people want to read. This is the story that connects people. The human experience is what binds us during tragedy, and it doesn't matter whether you're an economist in Chicago, a street performer in downtown New York or a businessman in Windhoek, Namibia - your humanity responded to that moment, and billions of people would hear your story and know a part of them lived in your experience.

As a fellow human, I can say my eyes teared up just writing this blog post - I expected nothing less. However, as I writer, I can now say that, finally, I am going to put my story of that day to the page. When we write, we grow. And I offer you that same challenge - take some time and write something about your human experience. I guarantee you, it will be worth it.
Posted by James Pressler at 9:58 AM